The concept of juxtaposing the unserious/ sarcastic persona of the ‘staged’ subject with the conservative or ‘posh’ aura plays a significant technical role in addressing how ethnic women feel about their British identity. 18th century costume juxtaposed with contemporary brands specific to ‘Black-British’ culture helps break the chasm between ‘Street’ and ‘Conservative' Britain. The use of floral wallpaper relief ornaments the paintings, embellishing them without the use of an ornate frame.

I began this series out of frustration of derogatory representations of ethnic people in historical portraiture, but particularly women. In grand galleries like the Tate Britain, National Gallery or Thyssen-Bornemisza, black/ethnic people are portrayed often as the 'servant’, ‘exotic object' or 'un-named' subject'. This seed of social-conditioning brings about the low-esteem of ethnic citizens.  I aim to re-write this unfortunate portrayal, empowering the way black/ ethnic women view themselves in 'art history'. 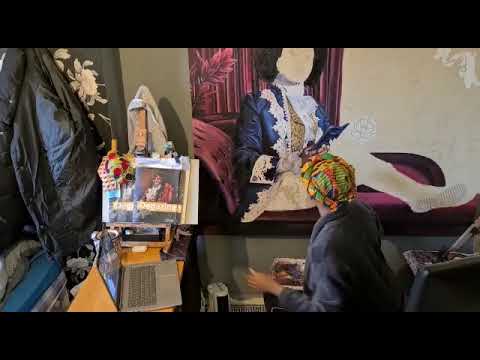